For as long as there has been human civilization, it has been shaped in part by the climate. Rackham history Ph.D. candidate David Patterson is exploring how medieval Europeans thought about the world around them. 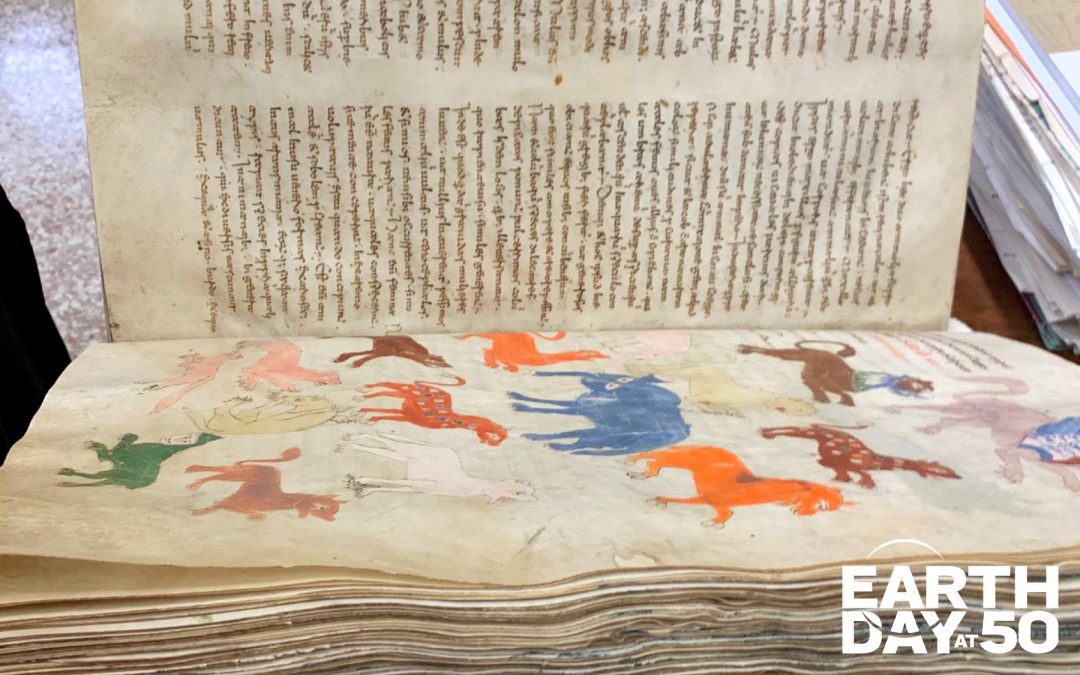 This article is the second in our Earth Day at 50 series, highlighting research by graduate students across Rackham’s four divisions—biomedical sciences, physical sciences and engineering, social and behavioral sciences, and humanities and the arts.

From this history, everyone may gather how mad it is to neglect the common good and to follow only private and selfish desires, since both sins insult the Creator so much, in fact, that He turns even the elements against the madness of the sinner. I shall easily prove this by examples still known to almost everyone. In the times of Charles the Great of good memory, who died almost thirty years ago, peace and concord ruled everywhere because our people were treading the one proper way, the way of the common welfare, and thus the way of God. But now since each goes his separate way, dissension and struggle abound. Once there was abundance and happiness everywhere, now everywhere there is want and sadness. Once even the elements smiled on everything and now they threaten, as Scripture which was left to us as the gift of God, testifies: ‘And the world will wage war against the mad.’

Sitting alone in the quiet library of Monte Cassino abbey, high on a rocky mountainside nestled in Italy’s Valle Latina, Rackham and U-M Department of History Ph.D. Candidate David Patterson considered these words by the medieval French historian Nithard, invoking the power of God and nature to castigate the sons of Charlemagne, then at war with one another over possession of their late father’s empire. The unjust conflict, Nithard claimed, had thrown the balance of nature into chaos and invited divine retribution on all parties. Storms ravaged, harvests were lost, and the common people suffered.

Nithard’s vivid description of the environmental consequences of royal malfeasance was but one of many similar passages uncovered by Patterson while combing through the archives of cathedrals and monasteries in France and Italy for his dissertation research. Combining his long-held interests in nature, the environment, and European history, Patterson sought to better understand how the people of early medieval Europe perceived weather, climate, and the natural world around them.

Though nowhere near the scale of what we see around the world today, the people of early medieval Europe were no strangers to a changing climate. Only identified in the last decade or so by historians, the year 536 saw the beginning of what’s been termed the Late Antique Little Ice Age, a 124-year period of intense cooling in the northern hemisphere likely sparked by a trio of major volcanic eruptions. This significant climatic shift was paired with equally widespread social and political upheavals in Europe, including human migration, major changes in land use and agriculture, and an unstable succession of kingdoms trying to stake their claims in the wake of the collapse of the Roman Empire. This era of uncertainty was followed by the Medieval Quiet Period, a time of relatively stable climate conditions that saw a similar regrowth of European society as the Dark Ages gave way to the Middle Ages.

While Patterson cautions against reading too much direct causality between these shifts, he agrees that a changing climate played its part in the human history of the continent.

“It’s too simplistic to say that the climate cooled, and thus you had this cascade of social and political changes,” Patterson says. “It’s mediated by cultural, political, economic, and social forces, but I think climate certainly did, and does, have an impact on human history.”

It was a connection the people of medieval Europe, like Nithard, also made. But in order to understand what they made of that connection, Patterson had to consult both written and natural history. 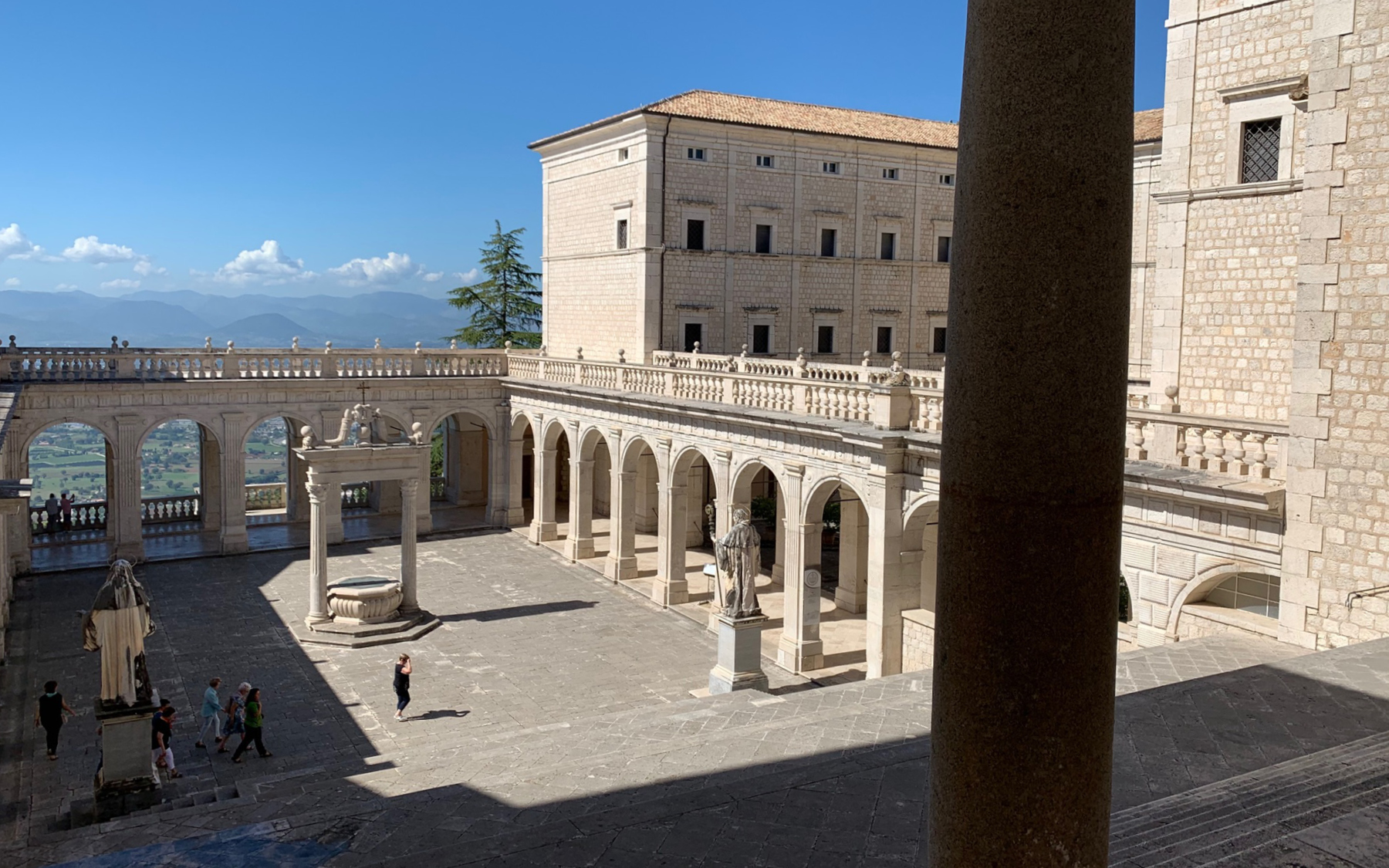 The monks of Monte Cassino abbey produced numerous volumes on medicine and natural history during the Middle Ages.

To study the history of the medieval environment, Patterson looked at two very different archives. The first was the traditional written record—the historical chronicles, natural history treatises, and theological texts of the early Middle Ages that have been central to historians’ understanding of the time period for centuries. The second is both less studied and far older—the archive of nature itself. Compiling data from sources including glacial ice cores—from which researchers can glean carbon dioxide levels, air temperature, and even volcanic eruptions—tree rings, fossilized pollen, and layers of lake bed sediment, this second archive gives a detailed record of changes in the Earth’s climate going back around 800,000 years.

While it could be expected that the two records would complement one another, the storms, poor harvests, and deep winters recorded by chroniclers corroborated by the natural record, Patterson found that wasn’t always the case. He noted that the natural archive preserved records of many more droughts and cold periods than are found in the written record, and those that are written down are usually connected with wider political or social events.

“My research shows that a lot of the descriptions of weather and climate in written sources are really political or theological,” Patterson says. “One way to critique the king was to point out increasing disorder in the natural world—what was perceived as chaos in the elements is often seen as a reflection of the ruler’s own sins or failures. It goes back to very old traditions we now call cosmic kingship, which ties the king’s conduct directly to his land.”

It’s a finding that speaks, Patterson says, to a broader medieval mindset that saw all things, from the most humble individual on Earth to the stars in the heavens, as closely connected. Among the material he collected, Patterson found medical illustrations that related the four humors—the four fluids medieval doctors believed were responsible for the functioning of the human body—with the four seasons, and in turn with the four classical elements of earth, wind, fire, and water.

“In the Middle Ages, people thought of weather and climate in much broader terms than we imagine them today,” Patterson says. “They’re influenced by the movements of planets and stars, and they in turn influence everything from the human body to politics, and vice versa. From the microcosm to the macrocosm, everything is connected.”

With the dawn of the scientific method, our understanding of weather and climate has vastly changed since the Middle Ages. We know that droughts are caused by a complex web of environmental factors, rather than divine retribution against a ruler’s personal conduct, and that epidemics result from the transmission of microorganisms rather than blood imbalances and too much southerly wind. But Patterson says understanding the connection between our actions and the planet is even more relevant now than in the time of Nithard.

“We’re learning we were wrong to think of ourselves as so separate from the world around us, and that our actions and choices do affect the climate, which changes our weather and environment,” he says. “Understanding weather and climate as deeply tied to human behavior, it turns out, is a very useful idea.”

Patterson is a recipient of a Rackham Graduate Student Research Grant, which allowed him to travel to Europe to conduct his field work. He also received a Rackham Predoctoral Fellowship, Conference Travel Grant, and has participated in Rackham professional development workshops that helped him develop his teaching philosophy.

“I’ve had Rackham support almost every semester I’ve been at Michigan,” Patterson says. “It’s been really helpful for research, finishing my dissertation, and developing as a scholar and a teacher.