Squirrels and the City

Few mammals are as ubiquitous as the squirrel, but what makes them act the way they do? Rackham student Amy-Charlotte Devitz takes us into the mind of the bushy tailed rodent. 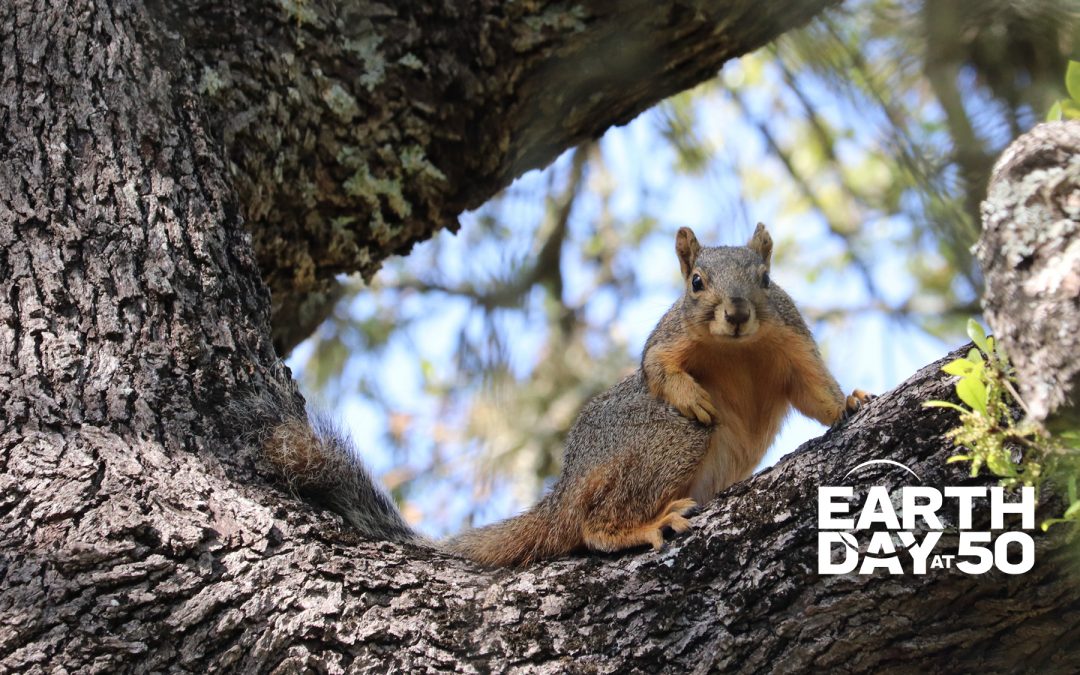 This article is the first in our Earth Day at 50 series, highlighting research by graduate students across Rackham’s four divisions—biomedical sciences, physical sciences and engineering, social and behavioral sciences, and humanities and the arts.

It may have been only days since the summer solstice, but when Amy-Charlotte Devitz’s alarm went off the sun was still two hours from brightening the horizon. In the pre-dawn twilight, she collected her field equipment—notebooks, sample containers, stopwatches, thick work gloves, and a motorized wheelchair adapted for off-road travel—and set out to meet the rest of her research team. A long day lay ahead.

Between June and September 2019, Devitz, a Frontiers Master’s Program student in the U-M Department of Ecology and Evolutionary Biology (EEB), and her team of undergraduate field technicians spent up to 10 hours every day on a mission to understand the mind of one of Ann Arbor’s most iconic residents—the fox squirrel.

Found throughout the eastern and central United States, as well as north into Canada and south into Mexico, the fox squirrel is both numerous and highly adaptable. A species of tree squirrel, they most commonly reside in forested landscapes, but increasingly have been making urban and suburban spaces their homes. Their varied diet—which ranges from nuts, seeds, and fruits to insects and bird eggs—coupled with a biannual reproductive cycle and high tolerance for human activity have allowed them to survive, and even thrive, in an urbanizing landscape that often pushes out other species. In many cases, including on the U-M campus, these bushy-tailed rodents often become celebrated by their human cohabitants, their charismatic behavior and willingness to approach anyone holding out a snack increasing their popularity and even leading to the creation of squirrel-watching clubs and social media accounts.

“Urban environments offer a unique ecosystem to study,” Devitz says. “The animals that live in them interact with people a lot more, and as urbanization increases these interactions have only become more common. It’s important for us to understand how these environmental changes impact not just their means of survival, like food availability, but their behavior and personality, as well.

Most pet owners would argue their furry friends have some measure of personality. And while much of this is anthropomorphism—the projection of human qualities onto nonhuman subjects—born out of affection, Devitz says it’s not all in our heads.

“I’ve always been really interested in the idea of animal personality,” she explains. “It’s not quite like human personality, it’s much more simplified, but we do see consistent individual variation in animal behavior.”

Some animals, for example, might be particularly bold or aggressive, while others of the same species exhibit greater restraint or shyness. Devitz’s goal was to gauge the variety of fox squirrel personality traits and see if they correlated to their interactions with human-built environments. To do this, her team collected squirrels for a very short time from nine different sites around the Ann Arbor area, ranging from the Edwin S. George Reserve, where the animals may never see a single human during their lifespans, to the Diag in the heart of U-M’s Ann Arbor campus. 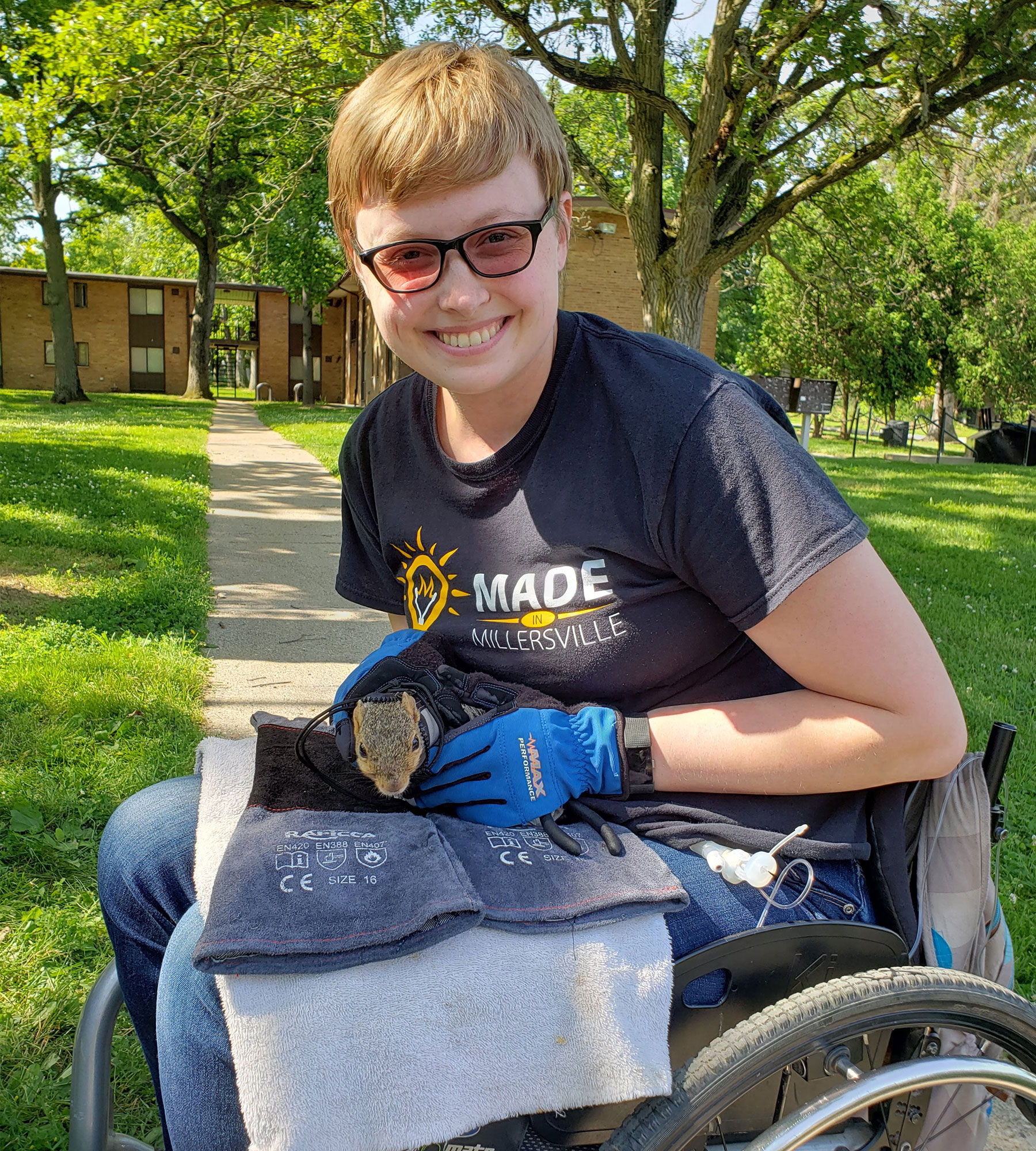 By studying individual squirrels, Devitz hopes to ultimately describe how the unique pressures of the urban environment shape their behavior.

Devitz and her team then observed and filmed the squirrels. Among the attributes Devitz tested were boldness, determined by whether the squirrel was vocal and active or quiet and still; exploration, based on its curiosity and interest in exploring various puzzles and structures brought by researchers to the field site; and aggression, measured by its willingness to approach and vocalize at its own reflection in a full-width mirror. The team also conducted health assessments, weighing the squirrels, taking hair and fecal samples, and determining their reproductive status. They then tagged the squirrels with ear tags sporting brightly colored pipe cleaners—a low-impact technique used by Ben Dantzer, Devitz’s adviser and an assistant professor in EEB and the Department of Psychology, for his own research on red squirrels in Canada’s Yukon Territory—and sent them on their way. The entire process from capture to release was over in about 25 minutes.

Devitz and her team are in the process of analyzing their data, but some tentative themes are beginning to emerge. Across all of their research sites, few of the squirrels exhibited major health concerns, though unsurprisingly the specimens found on the Diag tended to be larger and better fed than their woodland counterparts. The squirrels captured on campus also tended to exhibit higher levels of boldness and aggression, being more willing to approach humans for food, as well as more likely to shout and struggle upon capture. She also noticed female squirrels exhibited slightly higher aggression on average than males, something she hypothesizes could be due to having young to look after. For all these commonalities, however, individual differences remain.

“At each site, we’d see some really energetic squirrels bouncing around the trial box, while others just chilled,” Devitz says. “They’re a lot of fun to work with, and getting to see the full range of their behaviors hands-on was a neat experience.”

An added benefit of conducting research in urban spaces were the ample opportunities it allowed to interact with an interested public.

“We were often working in public parks, and that meant we got to interact with people for much of the time,” Devitz says. “Talking science with people, especially kids, is really fun. Squirrels are such charismatic, unique animals, and people always want to see what they’re up to. It’s one of my favorite parts about doing urban fieldwork.”

Devitz hopes to ultimately compile her findings into an urban behavioral syndrome that explains how the pressures unique to the urban environment shape animal behavior.

“In the urban environment there are, relatively speaking, evolutionarily new stressors,” Devitz explains. “Humans, cars, dogs, artificial light, trash, food waste, these are all distinct to the built environment, and we want to see how, and to what extent, they may be altering the behavior and personalities of the animals we share it with.”

Devitz received a Rackham Conference Travel Grant, enabling her to attend the Society for Integrative and Comparative Biology conference in Tampa Bay, Florida in January 2019. She has participated in multiple Rackham programs and workshops, including Bridges to the Doctorate, aimed at supporting students during their master’s degrees and helping them successfully transition to Ph.D. programs, as well as the Write-Together workshop series.

“I try and do events as often as I can,” Devitz says. “They’ve been helpful, and I’ve had a really good experience with them.”